American doctors, and medicating the effect rather than treating the cause

I recently went through a period where my blood pressure (BP) went up to 150/100 and stayed there. My normal BP is ~115/70, so I monitored it for a few days, and when it stayed there I made an appointment with my primary care physician (PCP). I explained everything to her, how I eat almost exclusively organic foods that I prepare at home, and I exercise harder than I have since 2011. I told her that I started feeling a little sick about two weeks ago, and that I was now feeling worse. I suggested that I probably had an infection, because that had been a recurring problem before we knew about the mast cell disease, and I had also just had a surgery in December. To me there was no logical reason that my BP should be that high unless I’m having an infection or some sort of heart issue.

Nonetheless, without doing any tests, her recommendation was that I should increase my Lisinopril dosage from 20mg to 40mg — which is the max you can take, and also has potentially severe side effects. My response was along the lines of, “Okay, whatev,” and after I left her office I made an appointment to see a specialist. I felt like she was just medicating the effect, and had little interest in understanding the cause.

Two days later I saw a specialist, said almost exactly the same things to her, and she started me on an antibiotic. That was on Wednesday, and by Friday night my BP returned to normal, about 115/70. This morning (Saturday) it was 120/75 without taking any Lisinopril. If it stays this low (because of the exercise and eating well) I won’t need to take any Lisinopril at all.

SUMMARY: I went from having my PCP recommend taking the highest possible dose of Lisinopril (that has potentially severe side effects) to possibly not needing to take any at all.

For better or worse, by having mast cell disease I learned that the American doctors I met — I saw 26 of them on the path to learning that I have mast cell disease — have a tendency to medicate the effect rather than treating the cause. It’s no exaggeration to say that this philosophy almost killed me with the mast cell disease (I went unconscious seven times), and after going through this again with something as simple as having high blood pressure, it feels like this is an epidemic in American medicine.

I came to understand that most doctors don’t know about mast cell disease — only 1 in 200,000 people have it — but it’s scary when a doctor doesn’t listen that (a) I eat better than I’ve ever eaten, and (b) I exercise harder than I have since 2011, and they still think adding more Lisinopril is the answer. As a patient that’s very frustrating. 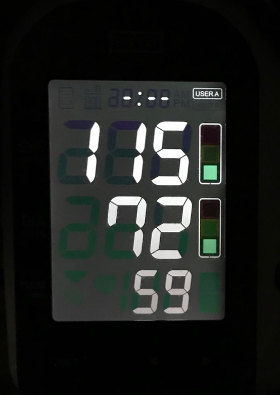