Funny iPad Photo: In the category of "iPad humor" ...

I have to say, I like Apple products quite a bit; I have an iPhone, MacBook Pro, and an iMac, and I'm sure the iPad will end up being very successful once people get their hands on it. But in the meantime, I love this funny "iPad" image. It sums up a lot of feelings about the Apple iPad introduction: 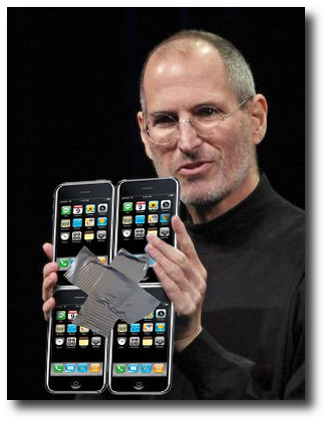 After watching the Apple iPad introduction, even an Apple fanboy (like myself) has to admit, this Steve Jobs "iPad photo" is pretty funny.

As the former owner of a software company, I really appreciate the tons of hours Apple developers put into creating new software for the iPad, and the hardware looks excellent as well. But as I mentioned in my iPad review, without support for multi-tasking, Flash, an iPad camera, and other missing elements, the iPad comes across as nothing but a large iPod touch -- sans the camera -- and that's what this funny image captures so well.