October, 2022: I just released my new book, Learn Functional Programming Without Fear, and my aim is to make it a terrific functional programming (FP) book for all OOP developers, especially Java and Kotlin programmers.

As a personal statement, I have no interest in pushing FP on anyone, but if you’re an OOP developer who is interested in FP, I hope this book is helpful. If you have some experience programming in Java, Kotlin, and OOP, I believe you’ll be able to read the whole book over a weekend, or in several nights during a week.

Why Java and Kotlin?

Why Java and Kotlin?:

Learn Functional Programming Without Fear is written with Scala programming language examples, and a primary reason for that is because Cats Effect and ZIO are two of the leading FP libraries on Earth, and they’re created with Scala. But as you can see in free samples of the book, if you’re a Java or Kotlin programmer, I believe the Scala examples will make sense to you.

I don’t use any special Scala techniques — other than generic types — so if you’re an OOP developer with a little bit of experience with generics, I think you’ll be able to read the code. For example, this is one of the most complicated Scala/FP functions I show in the first 1/3 of the book:

If you’re familiar with the Java Optional type, I think that Scala function will make sense. You read it like this:

“This is a function named makeInt. It takes a String input parameter named s, and returns an Int that’s wrapped inside an Option. In the function body, it tries to convert the String to an Int, using the String class toInt method. If that succeeds, it returns the Int value inside a Some, but if it fails, it catches the exception and returns a None.”

From a Java/Kotlin perspective, the things you need to know are:

As a final note, I used Java for 15 years, taught C, Java, and OOP classes, and used Kotlin to create Android apps, so I speak Java, Kotlin, and OOP as well as Scala and FP. (I also write OOP-style iOS/Android apps using Flutter and Dart.) In summary, I hope Learn Functional Programming Without Fear will be helpful to you! 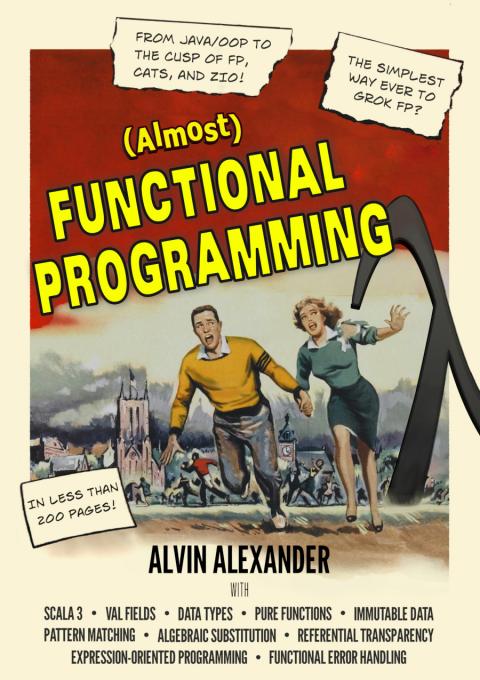