Going through the thought process of “Why do I want to write a book about Scala/FP?” led me to develop my goals for this book. They are:

In general, I want to help you start writing FP code without having to learn a lot of mathematics, background theory, and technical jargon like this: 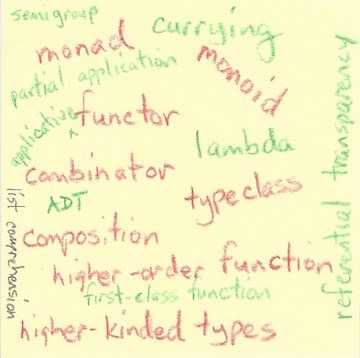 I refer to this as the “FP Terminology Barrier,” and I’ll discuss it more in an upcoming lesson.

While I generally avoid using technical jargon unless it’s necessary, I do discuss many of these terms in the appendices, and I also provide references to resources where you can dive deeper into FP theory.

A word of caution: “The Learning Cliff”

When I took my first thermodynamics class in college, I learned the quote I shared at the beginning of this chapter:

For me, this means that sometimes the only way you can learn something is to work on it with your hands. Until that first thermodynamics class I never really had to do the thing — work all of the exercises — to learn the material, but in that class I found out the hard way that there are times when I really have to dig in and “do the thing to learn the thing.”

Another time when I had this same feeling was around the year 2009, when I started learning a content management system (CMS) named Drupal. During that time I came across the following image, where someone (whose name I can’t find) made the point that Drupal didn’t have a learning curve, but instead it had a learning cliff, which they depicted like this: 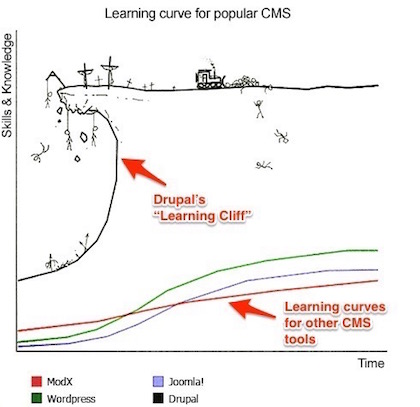 There are two things to say about Drupal’s learning cliff:

Just like FP, the problem with trying to learn Drupal is that when you get to a certain point (a) it feels like there are many things you need to learn simultaneously, and (b) it’s easy to take accidental detours on the learning path. As the image depicts, you either keep learning, or you fall off the cliff.

If you’ve read the book, Einstein: His Life and Universe, by Walter Isaacson, you know that Albert Einstein had to essentially go back to school and learn a lot of math so he could turn the Theory of Special Relativity into the Theory of General Relativity.

He published the “Einstein field equations” (shown here) in 2015, and other than trying to describe his theories to an advanced mathematician who could understand what he was talking about, there’s no way that Einstein could have developed these equations without buckling down and taking the time to learn the necessary math. (Even one of the smartest people in the history of Earth had to work hard to learn something new.)

In this book I hope to change the way you think about programming problems. As at least one functional developer has said, when you “Think in FP,” you see an application as (a) data flowing into the application, (b) being transformed by a series of transformer functions, and (c) producing an output.

The first lessons in this book are aimed at helping you to “Think in FP” — to see your applications in this way, as a series of data flows and transformers.

As an example of this, when you get to the “FP is Like Writing Unix Pipelines” lesson, I’ll share diagrams like this to explain my points: 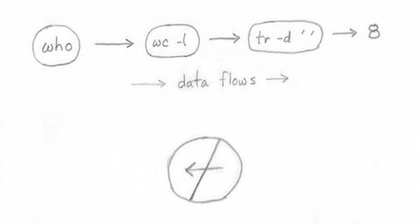 As this image shows, a Unix pipeline starts with a source of data — the who command — and then transforms that data with one or more functions. Data flows through the pipeline in only one direction, from one function to the next, and data is never modified, it’s only transformed from one format to another.

Another important part of “Thinking in FP” is that you’ll find that FP function signatures are very important — much more important than they are in OOP code. I cover this in depth in the lesson, “Pure Function Signatures Tell All.”

In summary, my goals for this book are:

An important part of the learning process is having a “Question Everything” spirit, and I’ll cover that next.