For functions without deep levels of recursion, there’s nothing wrong with the algorithms shown in the previous lessons. I use this simple, basic form of recursion when I know that I’m working with limited data sets. But in applications where you don’t know how much data you might be processing, it’s important that your recursive algorithms are tail-recursive, otherwise you’ll get a nasty StackOverflowError.

For instance, if you run the sum function from the previous lessons with a larger list, like this:

you’ll get a StackOverflowError, which is really counter to our desire to write great, bulletproof, functional programs.

The actual number of integers in a list needed to produce a StackOverflowError with this function will depend on the java command-line settings you use, but the last time I checked the default Java stack size it was 1,024 kb — yes, 1,024 kilobytes — just over one million bytes. That’s not much RAM to work with. I write more about this at the end of this lesson, including how to change the default stack size with the java command’s -Xss parameter.

I’ll cover tail recursion in the next lesson, but in this lesson I want to discuss the JVM stack and stack frames. If you’re not already familiar with these concepts, this discussion will help you understand what’s happening here. It can also help you debug “stack traces” in general.

If you’re already comfortable with the JVM stack and stack frames, feel free to skip on to the next lesson.

The first thing to know is that in all computer programming languages there is this thing called “the stack,” also known as the “call stack.”

Oracle provides the following description of the stack and stack frames as they relate to the JVM:

“Each JVM thread has a private Java virtual machine stack, created at the same time as the thread. A JVM stack stores frames, also called “stack frames”. A JVM stack is analogous to the stack of a conventional language such as C — it holds local variables and partial results, and plays a part in method invocation and return.”

Therefore, you can visualize that a single stack has a pile of stack frames that look like this: 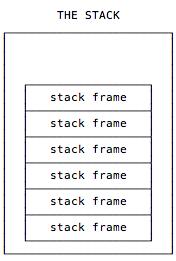 To explain the stack a little more, all of the following quoted text comes from the free, online version of a book titled, Inside the Java Virtual Machine, by Bill Venners. (I edited the text slightly to include only the portions relevant to stacks and stack frames.)

“When a new thread is launched, the JVM creates a new stack for the thread. A Java stack stores a thread’s state in discrete frames. The JVM only performs two operations directly on Java stacks: it pushes and pops frames.”

“When a thread invokes a Java method, the JVM creates and pushes a new frame onto the thread’s stack. This new frame then becomes the current frame. As the method executes, it uses the frame to store parameters, local variables, intermediate computations, and other data.”

As the previous paragraph implies, each instance of a method has its own stack frame. Therefore, when you see the term “stack frame,” you can think, “all of the stuff a method instance needs.”

What is a “Stack Frame”?

The same chapter in that book describes the “stack frame” as follows: 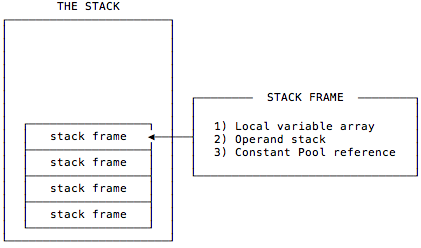 “The sizes of the local variables and operand stack, which are measured in words, depend upon the needs of each individual method. These sizes are determined at compile time and included in the class file data for each method.”

That’s important: the size of a stack frame varies depending on the local variables and operand stack. The book describes that size like this:

“When the JVM invokes a method, it checks the class data to determine the number of words required by the method in the local variables and operand stack. It creates a stack frame of the proper size for the method and pushes it onto the stack.”

These descriptions introduce the phrases word size, operand stack, and constant pool. Here are definitions of those terms:

First, word size is a unit of measure. From Chapter 5 of the same book, the word size can vary in JVM implementations, but it must be at least 32 bits so it can hold a value of type long or double.

Next, the operand stack is defined here on oracle.com, but as a word of warning, that definition gets into machine code very quickly. For instance, it shows how two integers are added together with the iadd instruction. You are welcome to dig into those details, but for our purposes, a simple way to think about the operand stack is that it’s memory (RAM) that is used as a working area inside a stack frame.

The Java Run-Time Constant Pool is defined at this oracle.com page, which states, “A run-time constant pool ... contains several kinds of constants, ranging from numeric literals known at compile-time, to method and field references that must be resolved at run-time. The run-time constant pool serves a function similar to that of a symbol table for a conventional programming language, although it contains a wider range of data than a typical symbol table.”

Summary to this point

I can summarize what we’ve learned about stacks and stack frames like this:

We can also say this about what happens when a Java/Scala/JVM method is invoked:

As it relates to recursion, that last point is important. As a function like our sum function works on a list, such as List(1,2,3), information about that instance of sum is in the top-most stack frame, and that instance of sum can’t see the data of other instances of the sum function. This is how what appears to be a single, local variable — like the values head and tail inside of sum — can seemingly have many different values at the same time.

One last resource on the stack and recursion

Not to belabor the point, but I want to share one last description of the stack (and the heap) that has specific comments about recursion. This discussion comes from a book named Algorithms, by Sedgewick and Wayne: 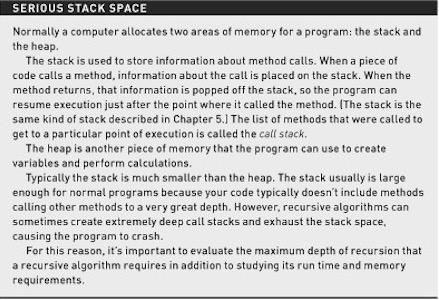 There are two important lines in this description that relate to recursive algorithms:

From all of these discussions I hope you can see the potential problem of recursive algorithms: