A Visual Look at JVM Stacks and Frames

Before the sum function is initially called, the only thing on the call stack is the application’s main method: 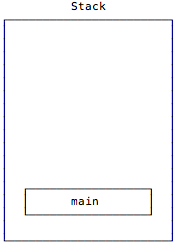 Then main calls sum with List(1,2,3), which I show here without the “List” to keep things simple: 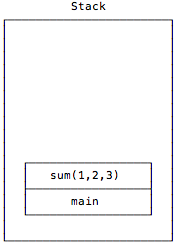 The data that’s given to sum matches its second case expression, and in my pseudocode, that expression evaluates to this: 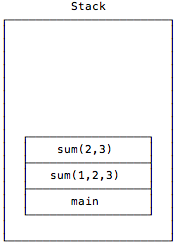 Again the second case expression is matched inside of sum, and it evaluates to this:

When a new instance of sum is called with the input parameter List(3), the stack looks like this: 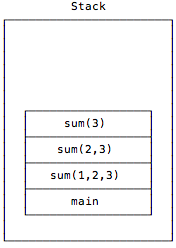 Again the second case expression is matched, and that code evaluates to this:

Finally, another instance of sum is called with the input parameter List() — also known as Nil — and the stack now looks like this: 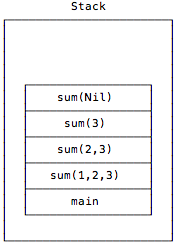 This time, when sum(Nil) is called, the first case expression is matched:

That pattern match causes this sum instance to return 0, and when it does, the call stack unwinds and the stack frames are popped off of the stack, as shown in this series of images:

In this process, as each sum call returns, its frame is popped off of the stack, and when the recursion completely ends, the main method is the only frame left on the call stack. (The value 6 is also returned by the first sum invocation to the place where it was called in the main method.)

I hope that gives you a good idea of how recursive function calls are pushed-on and popped-off the JVM call stack.

Manually dumping the stack with the sum example

If you want to explore this in code, you can also see the series of sum stack calls by modifying the sum function. To do this, add a couple of lines of code to the Nil case to print out stack trace information when that case is reached:

you’ll get this output when the Nil case is reached:

While that output isn’t too exciting, it shows that when the stack dump is manually triggered when the Nil case is reached, the sum function is on the stack five times. You can verify that this is correct by repeating the test with a List that has three elements, in which case you’ll see the sum function referenced only three times in the output:

Clearly the sum function is being added to the stack over and over again, once for each call.

I encourage you to try this on your own to become comfortable with what’s happening.

I hope this little dive into the JVM stack and stack frames helps to explain our current problem with “basic recursion.” As mentioned, if I try to pass a List with 10,000 elements into the current recursive sum function, it will generate a StackOverflowError. Because we’re trying to write bulletproof programs, this isn’t good.

Now that we looked at (a) basic recursion with the sum function, (b) how that works with stacks and stack frames in the last two lessons, and (c) how basic recursion can throw a StackOverflowError with large data sets, the next lesson shows how to fix these problems with something called “tail recursion.”

I didn’t get into all of the nitty-gritty details about the stack and stack frames in this lesson. If you want to learn more about the stack, here are some excellent resources:

One more thing: Viewing and setting the JVM stack size

“Well,” you say, “these days computers have crazy amounts of memory. Why is this such a problem?”

According to this Oracle document, with Java 6 the default stack size was very low: 1,024k on both Linux and Windows.

I encourage you to check the JVM stack size on your favorite computing platform(s). One way to check it is with a command like this on a Unix-based system:

When I do this on my current Mac OS X system, I see that the ThreadStackSize is 1024. I dug through this oracle.com documentation to find that this “1024” means “1,024 Kbytes”.

It’s important to know that you can also control the JVM stack size with the -Xss command line option:

That command sets the stack size to one megabyte. You specify the memory size attribute as m or M after the numeric value to get megabytes, as in 1m or 1M for one megabyte.

Use g or G to specify the size in gigabytes, but if you’re trying to use many MB or GB for the stack size, you’re doing something wrong. You may need this gigabytes option for the Xmx option, but you should never need it for this Xss attribute.

The Xss option can be helpful if you run into a StackOverflowError — although the next lesson on tail recursion is intended to help you from ever needing this command line option.

As a final note, you can find more options for controlling Java application memory use by looking at the output of the java -X command:

If you dig through the output of that command, you’ll find that the command-line arguments specifically related to Java application memory use are:

You can use these parameters on the java command line like this:

As before, valid memory values end with m or M for megabytes, and g or G for gigabytes: