This is an excerpt from the Scala Cookbook. (This is Recipe 10.1.)

Overview: The Scala collections hierarchy is very rich (both deep and wide), and understanding how it’s organized can be helpful when choosing a collection to solve a problem.

Figure 10-1, which shows the traits from which the Vector class inherits, demonstrates some of the complexity of the Scala collections hierarchy.

Figure 10-1. The traits inherited by the Vector class

Because Scala classes can inherit from traits, and well-designed traits are granular, a class hierarchy can look like this. However, don’t let Figure 10-1 throw you for a loop: you don’t need to know all those traits to use a Vector. In fact, using a Vector is straightforward:

At a high level, Scala’s collection classes begin with the Traversable and Iterable traits, and extend into the three main categories of sequences (Seq), sets (Set), and maps (Map). Sequences further branch off into indexed and linear sequences, as shown in Figure 10-2. 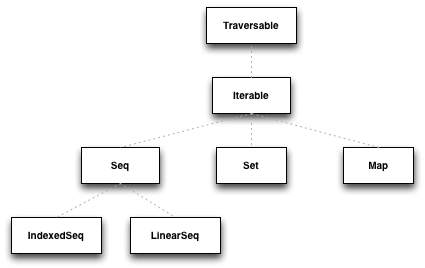 Figure 10-2. A high-level view of the Scala collections

The Iterable trait defines an iterator, which lets you loop through a collection’s elements one at a time, but when using an iterator, the collection can be traversed only once, because each element is consumed during the iteration process.

Digging a little deeper into the sequence hierarchy, Scala contains a large number of sequences, many of which are shown in Figure 10-3.

Figure 10-3. A portion of the Scala sequence hierarchy

These traits and classes are described in Table 10-1 through Table 10-4 of the Scala Cookbook.

As shown in Figure 10-3, sequences branch off into two main categories: indexed sequences and linear sequences (linked lists). An IndexedSeq indicates that random access of elements is efficient, such as accessing an Array element as arr(5000). By default, specifying that you want an IndexedSeq with Scala 2.10.x creates a Vector:

A LinearSeq implies that the collection can be efficiently split into head and tail components, and it’s common to work with them using the head, tail, and isEmpty methods. Note that creating a LinearSeq creates a List, which is a singly-linked list:

Like a Java Map, Ruby Hash, or Python dictionary, a Scala Map is a collection of key/value pairs, where all the keys must be unique. The most common map classes are shown in Figure 10-4. 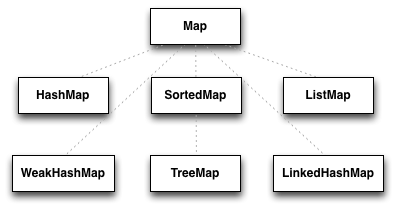 Map traits and classes are discussed in Table 10-5. When you just need a simple, immutable map, you can create one without requiring an import:

The mutable map is not in scope by default, so you must import it (or specify its full path) to use it:

Like a Java Set, a Scala Set is a collection of unique elements. The common set classes are shown in Figure 10-5.

Set traits and classes are discussed in Table 10-6, but as a quick preview, if you just need an immutable set, you can create it like this, without needing an import statement:

Just like a map, if you want to use a mutable set, you must import it, or specify its complete path:

There are many additional collection traits and classes, including Stream, Queue, Stack, and Range. You can also create views on collections (like a database view); use iterators; and work with the Option, Some, and None types as collections. All of these classes (and objects) are demonstrated in this and the next chapter.

Collections can also be thought of in terms of being strict or lazy. See Recipe 10.2 for a discussion of these terms.