The Definition of “Pure Function”

“When a function is pure,
we say that ‘output depends (only) on input.’”

From the book, Becoming Functional
(with the word “only” added by me)

This lesson has two goals:

It also tries to simplify the pure function definition, and shares a tip on how to easily identify many impure functions.

As I mentioned in the “What is Functional Programming?” chapter, I define functional programming (FP) like this:

Functional programming is a way of writing software applications using only pure functions and immutable values.

Just like the term functional programming, different people will give you different definitions of a pure function. I provide links to some of those at the end of this lesson, but skipping those for now, Wikipedia defines a pure function like this:

That’s good, but I prefer to reorganize those statements like this:

This can be summed up concisely with this definition:

A pure function is a function that depends only on its declared input parameters and its algorithm to produce its output. It does not read any other values from “the outside world” — the world outside of the function’s scope — and it does not modify any values in the outside world.

A mantra for writing pure functions

Once you’ve seen a formal pure function definition, I prefer this short mantra:

I like that because it’s short and easy to remember, but technically it isn’t 100% accurate because it doesn’t address side effects. A more accurate way of saying this is:

You can represent that as an image like this: 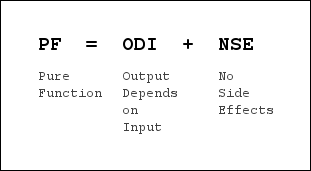 In this book I’ll generally either write, “Output depends on input,” or show one of these images.

Examples of pure and impure functions

Given the definition of pure functions and these simpler mantras, let’s look at some examples of pure and impure functions.

Mathematical functions are great examples of pure functions because it’s pretty obvious that “output depends only on input.” Methods like these in scala.math._ are all pure functions:

I refer to these as “methods” because they are defined using def in the package object math. However, these methods work just like functions, so I also refer to them as pure functions.

Because a Scala String is immutable, every method available to a String is a pure function, including:

Many methods that are available on Scala’s collections’ classes fit the definition of a pure function, including the common ones:

Conversely, the following functions are impure.

Going right back to the collections’ classes, the foreach method is impure. foreach is used only for its side effects, which you can tell by looking at its signature on the Seq class:

Date and time related methods like getDayOfWeek, getHour, and getMinute are all impure because their output depends on something other than their inputs. Their results rely on some form of hidden I/O.

Methods on the scala.util.Random class like nextInt are also impure because their output depends on something other than their inputs.

In general, impure functions do one or more of these things:

By looking at function signatures only, there are two ways you can identify many impure functions:

For example, here’s the signature for the println method of the Scala Predef object:

Because println is such a commonly-used method you already know that it writes information to the outside world, but if you didn’t know that, its Unit return type would be a terrific hint of that behavior.

Similarly when you look at the “read*” methods that were formerly in Predef (and are now in scala.io.StdIn), you’ll see that a method like readLine takes no input parameters, which is also a giveaway that it is impure:

Because it takes no input parameters, the mantra, “Output depends only on input” clearly can’t apply to it.

As you saw in this lesson, this is my formal definition of a pure function:

A pure function is a function that depends only on its declared inputs and its internal algorithm to produce its output. It does not read any other values from “the outside world” — the world outside of the function’s scope — and it does not modify any values in the outside world.

Once you understand the complete definition, I prefer the short mantra:

Now that you’ve seen the definition of a pure function, I’ll show some problems that arise from using impure functions, and then summarize the benefits of using pure functions.