Functions Are Variables, Too

“A variable is a named entity that refers to an object. A variable is either a val or a var. Both vals and vars must be initialized when defined, but only vars can be later reassigned to refer to a different object.”

The goal of this lesson is to show that in a good FP language like Scala, you can use functions as values. In the same way that you create and use String and Int values, you can use a function:

To support this goal, this lesson shows:

Understanding Scala’s val function syntax is important because you’ll see function signatures over and over in a variety of places, including:

You’ll see examples of most of these in this lesson.

Before getting into this lesson, it will help to make sure that I’m formal about how I use certain terminology. For instance, given this expression:

it’s important to be clear about these things:

Wikipedia states that in algebra, “a variable is an alphabetic character representing a number, called the value of the variable, which is either arbitrary or not fully specified or unknown.” So in this way, refering to x as a variable is consistent with algebraic terms.

But because programmers and the Scala compiler know that 42 is an Int, it’s convenient to use the shorter form.

I’m formalizing these definitions now because as you’re about to see, these terms also apply to creating functions: functions also have variable names, types, and values.

If you haven’t heard of the term “function literal” before, it’s important to know that in this example:

this part of the code is a function literal:

It’s just like saying that this is a string literal:

I mention this because ...

Function literals can be assigned to variables

In functional programming languages, function literals can be assigned to variable names. In Scala this means:

In the “Explaining the val Function Syntax” appendix, I show two different ways to define functions using vals in Scala. In this lesson I’ll use only the following approach, which shows the “implicit return type” syntax:

In this case “implicit” means that this function doesn’t explicitly state that it returns a Boolean value; both you and the compiler can infer that by looking at the function body.

Scala also has a val function syntax where you explicitly declare the function’s return type, and I show that in the appendix.

I discuss the implicit syntax in detail in the appendix, but here’s a quick look at what each of those fields means: 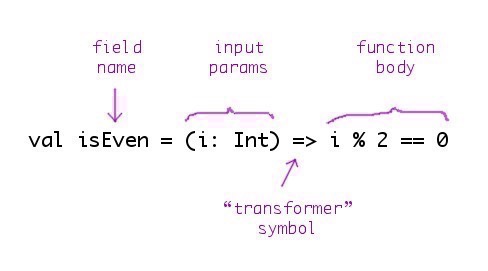 If that syntax looks a little unusual, fear not, I show more examples of it in this lesson and in the appendices.

Other ways to write this function

This function body is a short way of saying that it returns true if the Int it is given is an even number, otherwise it returns false. If you don’t like the way that code reads, it may help to put curly braces around the function body:

Or you can make the if/else condition more obvious:

You can also put curly braces around that function body:

Finally, if you prefer a really long form, you can write isEven like this:

Note: I only show this last version to show an example of a multi-line function body. I don’t recommend writing short functions like this.

If you were going to explain any of these functions to another person, a good explanation would be like this:

“The function isEven transforms the input Int into a Boolean value based on its algorithm, which in this case is i % 2 == 0.

When you read that sentence, it becomes clear that the Boolean return value is implied (implicit). I know that when I look at the code I have to pause for a moment before thinking, “Ah, it has a Boolean return type,” because it takes a moment for my brain to evaluate the function body to determine its return type. Therefore, even though it’s more verbose, I generally prefer to write functions that explicitly specify their return type, because then I don’t have to read the function body to determine the return type.

IMHO, if (a) you have to read a function’s body to determine its return type while (b) what you’re really trying to do is understand some other block of code — such as when you’re debugging a problem — then (c) this forces you to think about low-level details that aren’t important to the problem at hand. That’s just my opinion, but it’s what I have come to believe; I’d rather just glance at the function’s type signature.

Put another way, it’s often easier to write functions that don’t declare their return types, but it’s harder to maintain them.

You can come to understand the implicit val function syntax by pasting a few functions into the Scala REPL. For instance, when you paste this function into the REPL:

you’ll see that the REPL responds by showing that isEven is an instance of something called <function1>:

And when you paste a function that takes two input parameters into the REPL:

you’ll see that it’s an instance of <function2>:

When I line up the REPL output for those two examples, like this:

you can begin to see that the general form for the way the REPL displays function variables is this:

You can see this more clearly when I highlight the function types and values. This is the REPL output for isEven:

and this is the output for the sum function:

Cool FP developers generally don’t say, “a function returns a result.” They say things like, “a function transforms its inputs into an output value.” Or, as it’s stated in the Land of Lisp book, Lisp purists prefer to say that “a function evaluates to a result.” This may seem like a minor point, but I find that using phrases like this helps my brain to think of my code as being a combination of algebraic functions (or equations) — and that’s a good way to think.

What <function1> and <function2> mean

As I discuss in that appendix, behind the scenes the Scala compiler converts this function:

I don’t want to get too hung up on these details right now, but this is where the Function2 reference comes from. For more information on this topic, see the “Explaining the val Function Syntax” appendix.

Passing functions into other functions

A great thing about functional programming is that you can pass functions around just like other variables, and the most obvious thing this means is that you can pass one function into another. A good way to demonstrate this is with the methods in the Scala collections classes.

and these two functions that take Int parameters:

you can see that isEven works great with the List class filter method:

and the double function works great with the map method:

Passing functions into other functions like this is what functional programming is all about.

How this works (the short answer)

In the upcoming lessons on Higher-Order Functions I show how to write methods like map and filter, but here’s a short discussion of how the process of passing one function into another function (or method) works.

Technically filter is written as a method that takes a function as an input parameter. Any function it accepts must (a) take an element of the type contained in the collection, and (b) return a Boolean value. Because in this example filter is invoked on ints — which is a List[Int] — it expects a function that takes an Int and returns a Boolean. Because isEven transforms an Int to a Boolean, it works great with filter for this collection.

A look at the Scaladoc

The filter method Scaladoc is shown in the next image. Notice how it takes a predicate which has the generic type A as its input parameter, and it returns a List of the same generic type A. It’s defined this way because filter doesn’t transform the list elements, it just filters out the ones you don’t want.

I explain this in more detail in upcoming lessons, but the important point for this lesson is that you can pass a function variable into another function.

Because functions are variables ...

Because functions are variables, you can do all sorts of things with them. For instance, if you define two functions like this:

you can have fun and store them in a Map:

If you put that code into the REPL, you’ll have two functions stored as values inside a Map.

Now that they’re in there, you can pass the Map around as desired, and then later on get references to the functions using the usual Map approach, i.e., by supplying their key values. For example, this is how you get a reference to the double function that’s stored in the Map:

This is just like getting a String or an Int or any other reference out of a Map — you specify the key that corresponds to the value.

Now that you have a reference to the original double function, you can invoke it:

You can do the same things with the other function I put in the Map:

These examples show how to create functions as variables, store them in a Map, get them out of the Map, and then use them.

The point of this example

Besides showing how to put function variables into Maps, a key point of this example is: in Scala you can use a function variable just like a String variable or an Int variable. The sooner you begin treating functions as variables in your own code, the further you’ll be down the path of becoming a great functional programmer.

Given what I’ve shown so far, this request may be a bit of an advanced exercise, but ... here’s that Map example again:

Given that Map, sketch its data type here:

As an example of what I’m looking for, this Map:

has a data type of:

That’s what I’m looking for in this exercise: the type of the Map named functions.

Solution to the exercise

If you pasted the Map code into the REPL, you saw its output:

The first part of that output shows the Map’s data type:

The data type for the Map’s key is String, and the type for its value is shown as Int => Int. That’s how you write the type for a function that transforms a single Int input parameter to a resulting Int value. As you know from the previous discussion, this means that it’s an instance of the Function1 trait.

As a second example, if the Map was holding a function that took two Int’s as input parameters and returns an Int — such as the earlier sum function — its type would be shown like this:

That would be a Function2 instance, because it takes two input parameters.

To help you get comfortable with the “implicit return type” version of the val function syntax, here are the functions I showed in this lesson:

And here are a few more functions that show different input parameter types:

Here’s a summary of what I showed in this lesson:

In regards to val function signatures, understanding them is important because you’ll see them in many places, including function literals, the Scaladoc, REPL output, and other developer’s code. You’ll also need to know this syntax so you can write your own functions that take other functions as input parameters.

The next lesson shows that you can use def methods just like val functions. That’s important because most developers prefer to use the def method syntax to define their algorithms.