Here are a couple of Cats-Effect links:

An introduction to Akka Actors

This is an excerpt from my book, Hello, Scala. In this lesson I’ll show two examples of applications that use Akka actors, both of which can help you get started with my larger “Alexa written with Akka” = Aleka application.

First, let’s look at an example of how to write a “Hello, world” application using Akka.

An actor is an instance of the akka.actor.Actor class, and once it’s created it starts running on a parallel thread, and all it does is respond to messages that are sent to it. For this “Hello, world” example I want an actor that responds to “hello” messages, so I start with code like this:

In this final, third part of my three-part introductory series on Scala.js I’ll demonstrate a technique that can help you build single-page web applications with Scala.js. That is, the body of your HTML page will look like this:

After that, your entire application will then be written in Scala/Scala.js, which is converted into JavaScript code in the scala-js-hello-world-fastopt.js file.

A Scala.js tutorial: “Hello, world” with an HTML button click

In my first “Hello, world” Scala.js tutorial I showed how to get started with Scala.js, including some necessary setup/configuration work. That tutorial ended by showing how to get the string “Hello, world” displayed in a browser.

In this tutorial I’ll take this a little further and show how to create an HTML button you can click that results in the string “Hello, world” being displayed in a JavaScript alert window. When the button is clicked, the alert window will be displayed by your Scala/Scala.js code.

Getting started with Scala.js (a “Hello, world” example)

As I try to organize things a bit around here, here’s a list of some tutorials I’ve written lately about the Scala collections classes:

Way back when I lived in this low-income apartment complex in Wasilla, Alaska — technically I had no income at the time, and it’s ridiculously hard to find a place to live in Alaska in the summer — and spent as much time as I could meditating in the mountains, I created a vi/vim editor video tutorial and put it on YouTube. I just noticed that video has now exceeded 200,000 views. It feels a little weird to think that over 200K people have started to learn vi/vim from that video.

A funny thing about making that video is that the walls in that apartment complex were paper-thin. I could hear everything my neighbors did in their apartments (use your imagination and you won’t be wrong), and they could hear me, so I intentionally tried not to talk too loud in the video. I had to edit the video at several points to crop out some of my neighbors yelling at each other.

“Hello, Scala” - A swift introduction to a scalable programming language 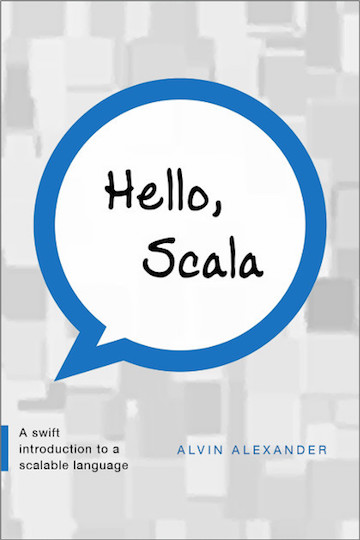 The Andreessen Horowitz website has a blog post titled The Crypto Canon which has links to good resources on what a blockchain is, how bitcoin and others work, Ethereum, and much more.

Here’s a link to an H2 JDBC database tutorial (just some sample code).